The Army Sutler's Role in the Encampment -- an 1861 Description

What was a sutler and what his role in Civil War camp life?  Here is an interesting first-person description of how the Army Sutler runs his business printed in the New York City Sunday Mercury Newspaper, September 29, 1861:
The sutler’s tent is the same in all camps we ever visited.  Be it understood, for the benefit of those who are uniformed, that the sutler is the merchant of the regiment.  He sells lemonade, tobacco (in papers and plugs), cigars (of cabbage, oak leaves, or tobacco), red herrings, cracker, and molasses-cake.  He would sell whiskey if he dared.  His tent is always lumbered up with barrels and boxes, and at the customers’ end of it a board across two pork-barrels does duty for a counter.  Here the men come in crowds every hour in the day, to get some little delicacy (after salt fat pork and no vegetables, with the sun at ninety-eight degrees, even molasses-cake is a delicacy) to eat, or for a glass of cool lemonade to drink and make much of. 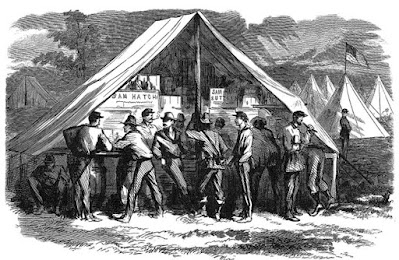 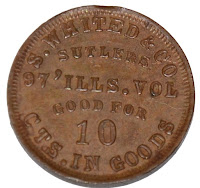 Children projects:
1) Explore why it might not be wise for a soldier to spend money that he had not yet actually gotten even though his circumstances might pressure him to need/want to make purchases.  How is this like “credit” buying today?  Remember that most of these soldiers had a family at home that they were needing to support with the money they were being paid.
2) How would your child feel about needing to drinking muddy water with no ice on a hot day?  It’s an interesting little historical tidbit that gives insight into the pressure that a soldier back then had to face.  No bottled water.  No ice in the fridge.  Drink it anyway. . .
3) Explore the issue of “rank has its privileges” back in then, and today.  Talk through the writer’s clear condemnation as unfair that officers can buy drinks while the men in the ranks are prohibited from buying.
Posted by Glenn Rowe at 11:58 AM No comments: