1)  Introduction to the United States Christian Commission
Soldier's Aid Soceity
Before I got into reenacting I hadn't heard about the United States Christian Commission.  I was interested in portraying a chaplain for a variety of reasons, not the least of which was the cost of buying rifle on our family budget.  Vicki said she didn't want to wear a hoop skirt, especially when she found out it represented the rich elites of society.  She had always enjoyed cooking and helping others.  At our first national reenactment, we met people who were portraying the USCC.  They did it mostly as a living history approach with a nice display of a lending library and talking to people about it.  They did offer lemonade at their tent to the soldiers who came by.  Vicki said she wanted to do something along that line.  On our website I give a general description of how things have developed in our portrayal of the USCC.  Check out my comments there too.
﻿﻿ ﻿      We soon realized that most reenactors were like us and were not aware of the history of this important soldier's aid society. It took a while for us to help reenactors understand what we were portraying.  At first reenactors couldn't understand what we offered was really "free".  One thing that has helped us introduce reenactors and spectators alike to the USCC is a short descriptive pamphlet that I wrote years ago.  It was a condensation of a report the USCC published in October 1863.  When I talk to people I use the pamphlet as a supplement to the conversation.  It's always hepful to have something for people to take along with them to reenforce the things you have shared with them.  I share it as an example you might find helpful:


USCC Informational Pamphlet
The USCC originated at the YMCA Convention of loyal states in New York City on Nov.16, 1861.  It was formed to promote both the spiritual and temporal welfare of our brave men in arms.  Like the U.S. government, it was "national", giving out impartially to all soldiers without local or state distinctions.  Like our Lord Jesus Christ, it ministered as "Christian", seeking to help both body and soul.
The Commission viewed our brave men as deserving of our help to relieve the anguish of the battlefield and the hospital.  Realizing that our men were "mortal yet immortal", the USCC sought to strengthen them spiritually in the light of Christ while alive, and to afford them honorable burial in death.  Viewing our men as "citizen soldier's", only temporarily engaged in the pursuits of war, the USCC sought to enable them to face the dangers of camp life and the temptations of being away from home and community by supplying some of the moral and physical support of father, mother, brother, sister, wife, friends, minister and church to cheer and sustain them in their hardships, toils, perils, temptations and privation.
Into this citizen army, the USCC sent dedicated Christian "delegates" to encourage and strengthen those who followed Christ and call to salvation those who did not yet serve Jesus as Savior and Lord.
The stores and literature that the USCC provided were supplied and gathered without any government aid.  Chaplains were often sparse among the regiments and usually had few resources.  The USCC supplied to both the army and the navy Scriptures, books, papers, and tracts.  They worked without salary, distributing the stores and literature that were donated and sent from home.  In the camp that aim of the USCC was to save the soul and strengthen the believer through various means.  They promoted letter writing to bolster the soldier's morale.  Along with the distribution of religious and wholesome literature, they provided instruction and guidance through preaching, teaching and social meetings.  In both the camp and the hospital, the delegates worked with the chaplains as God's hands, feet, and voice.
By contrast the battle field demanded they focus on the relief of the soldier's hunger, thirst and pain.  Their work began even as the battle raged.  all over the field, the conflict produced the dead and the wounded.  Those soldier who could crawled or hobbled toward shelter and help.  Others had to lie suffering in thirst and anguish until they were carried on stretchers to the hospital.  The delegates wrote down last messages to loved ones for the dying, and gave comfort by pointing their hearts toward Christ the Savior.  They assisted the surgeons in gathering the wounded, even under the guns of the enemy if needed.  In the hospitals they stripped off the bloody garments, help with amputations, washed the wounds, prepared and served food and drink.  They also gave Christian burial to the dead as circumstances permitted.
The following list illustrates the wide variety of help offered to the soldiers by the USCC:
CLOTHING such as cotton or flannel shirts and drawers, slippers, and socks;  sheets, pillow cases, bed-ticks, pads for fractured limbs and wounds;  fans, netting to protect from flies, housewives (sewing kits), handkerchiefs, and wash rags.
FOOD such as oatmeal, farina, cornstarch, dried rusk, jellies, jams, soda biscuits, crackers, butter, onions, apples, cranberries, pickles, oranges, and dried fruits.
BEVERAGES & STIMULANTS such as good black tea, chocolate, syrups, and lemonade.  Wine and brandy were offered to the sick and suffering.
GOOD READING MATERIAL of lively interesting books, monthly's, pictorials, works of art, science and literature.  The USCC motto was "Send no trash".
﻿
﻿ ﻿ ﻿      STATIONERY, envelopes and pencils were widely distributed.
"When he saw him, he had compassion on him, and went to him and bound up his wounds, pouring in oil and wine, set him on his own beast, and brought him to an inn and took care of him."  Luke 10:33-34
The USCC was present to HELP:  This incident reported by Rev. W.D.Siegfred while working at Gettysburg illustrates their mission and ministry:  "A brave young man, not seriously wounded, came limping up to our tent and requested some cloths and other articles to dress his wound himself as all hands were busy with worse cases.  The articles I handed him at once, at the same time giving him a drink of ice-cold lemonade just prepared.  "Ah!' he said, 'there's no red tape process here!  You men of the Christian Commission give a fellow what he needs, when he needs it, without a tedious process of waiting for orders and then waiting for them to be filled.  Thank you, gentlemen.'  And he turned away with a glad heart."
Our family has chosen to portray the chaplaincy and the U.S. Christian Commission.  We honor the faithful servants who labored quietly to minister to both the physical and spiritual needs of our brave soldiers during the Civil War.
Jesus said "Verily I say unto you, insomuch as ye have done it unto one of  the least of these my brethern, ye have done it unto me."  Matthew 25:40
[end of educational pamphlet]

Whatever you write up, try to include an explanation of their mission and description of some of the many things they did to minister to the soldiers.  Look at it as an opportunity to educate those who come to your tent about an honorable group of people who took God's command to "love your neighbor as yourself" seriously.

The Christian Commission gave away covers and stationery to help the soldiers keep connected with family back home.  The delegates would help them write letters and at times even help carry letters back home.
Early on we began reproducing USCC covers and stationery to hand out to the Union troops.  Sometimes I would walk the encampment handing out covers.  We would also have them available at our tent in "mail kits" as gifts.  This led to reproducing the Civil War era stamps for the reenactors.  (And then to reproducing the patriotic covers which I sell.)  The question arose what could we do for the Confederate reenactors, since I do not have a Southern Soldier's Aid Society cover for them.  (IF anyone has an example of one, I would be very interested in knowing about it.)  We came up with the idea of putting out a CS mail kit with a "plain cover", an envelope with no patriotic design printed on it.  These were very commonly used, especially in the South, and especially as the war dragged on and resources became scarce.  Plain covers were also used by Union soldiers when patriotics were not available or were too expensive to buy.
I look at the Mail Kits as a gift that both educates and encourages the reenactors who come to our tent.  The kit includes a cover and a piece of stationery, a stamp which may be loose or affixed and cancelled (to be used as a letter from home by the reenactor to display), a copy of one the USCC Incident Reports to educate, a copy of a Civil War era religious tract, a copy of our USCC Information Pamphlet listed above, and usually some other miscellaneous item like a set of match labels or a paper ID tag or a pill packet, etc.  This is all wrapped in wax paper to keep it clean and together.   My hope is that the reenactor will learn something he or she didn't know about history and also have something he or she can enjoy using for fun or living history.  I offer the Union troops a choice or the USCC or a plain cover to give them variety for their impression.
Doing Mail kits may not be your "thing".  But I would challenge you to come up with creative ways that fit your interests and resources to help others discover this interesting part of Civil War history. 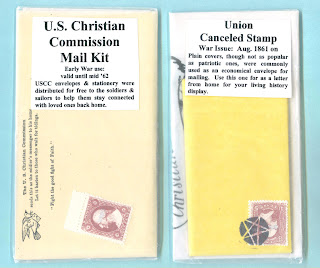 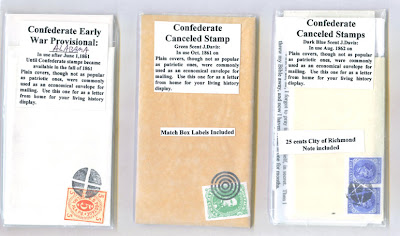 Tin Can Cups
Tin cans are a practical and easy way to give out cold drinks in something that doesn't look farby to spectators when the reenactor walks away with it.  If you have the time and patience, putting a label on the can really seems to add to the enjoyment of the reenactors.
While the tin cans we have today are not "authentic" in construction, spectators will get a much better impression of what it was like "back then" in seeing this instead of a reenactor drinking from a styrofoam cup.  It's always interesting to me when I walk the camp to see the many tin can cups at the various unit campsites.  I'm sure it adds to the spectators impression of what it was like "back then" too.  Occasionally a reenactor will say "I already have that labeled can, but I don't have that one yet."  There are some soldiers who use them for living history displays.  And some of the guys have them at home as mementos of the various reenactments they've met us at.  That makes the evenings I spend labeling cans worthwhile.  Simple joys make life interesting.
﻿﻿﻿﻿
﻿﻿﻿﻿