This page is based on notes that I have used to give a talk on doing mail calls at reenactments from time to time.  It's NOT presented as exhaustive.  It's ideas, lists, suggestions and options that I've tried/ seen used to "bring mails calls to life".  Obviously when I do my talks, I use props of various types of covers & stamps to help people better understand the importance and variety of Civil War letters.  Consider this page Under Construction, as I will add to it from time to time.
Introductory Background:
Letter writing became a common occupation for Civil War soldiers on both sides.  Most had never been very far from home before they enlisted/ were drafted.  Now they are going places and seeing things they had never experienced.  Yet they still longed to remain connected with what was happening back home.  Its natural then that letter writing became an important part of camp life.  Not only did soldiers write home, they longed for letters from home.  Many letters contain suggestions, even complaints about wishing there was more news from home.
Although grammar, spelling and structure varied widely, generally they wrote more formally.  Rather than say "thank you", its "I wish to thank your" or I wish to express my thanks to you".
To see the variety of ways covers were addressed, go on ebay under civil war covers/ patriotic/ envelope options and scroll down through the ones offered for sale.  It will give you ideas of the variety.  Don't feel locked into only one way of writing out addresses when you do a mail call. 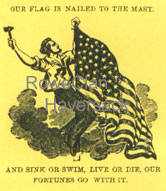 Getting Prepared:  What to do?  Think through your Target Audience
1) For Fun within the Group:  exchanging letter among friends within the unit/ mixture of first person & poking fun etc.  Reenacted with a unit that enjoyed doing this.  Letters were pretend first person from "mom/wife/sweetheart, etc" to each other;  a mixture of fake history, references to personal foibles at past reenactments, poking fun at each other.  Enough semi-serious historical references were included to make it interesting.  It was a tradition to do it at each reenactment.  And on-going tit-for-tat letters made for an interesting summer.  Letters from "mom" or "wife" tended to be the funniest as I remember.  I made up a few fake letters portraying bills from local merchants complaining that the wife had bought items (furniture, livestock feed, dress shop) that needed to be paid for by the soldier.  Be creative.  They used regular paper folded up since it was just for "the group" and not for spectators.
2) For Teaching within the Group:  ghost writing letters in first person to people within the group, both soldiers & civilians for the season; based on their first person impression etc.  For continuity, keep a log of details when writing the letters.  Typically a little more serious in objective than option 1.
Also done only once a year, say at the "home" event as a special treat.  One or more letter writers try to personalize the letters to each reenactor, or the real wives/sweethearts of the reenactors write the letters.  Another approach is to write up one or two generic letters which are photocopied and inserted into the individually addressed covers.

3) For Teaching the Spectators:  do the mail call to be seen by spectators.  Should be announced ahead of time/ perhaps done more than once during the reenactment.  The soldiers should be excited to get letters.   A chaplain or a NCO can announce the mail call and hand out the letters.  Have soldiers read aloud parts of letters (best to plan ahead who and keep the parts shorter), react to "dear John" and "death notices" etc.  The whole point is to do it to show what affect letters from home would have on the soldiers.  Sometimes it's helpful to have a narrator set it up for the spectators.  This makes an interesting addition to a school day event.
Another approach for involving spectators one reenactor group has found helpful:  a soldier receiving mail says he has lost his spectacles and asks for volunteers to help him read his letters.  He picks a couple of different children from the audience.
Use covers & stamps to tell a story:
By using props of reproduction covers & stamps, you add visual reinforcement to the mail call.  Especially if you are doing this for spectators, its helpful to let them see, even handle, in order to learn.
1) Plain cover.  colors of paper varied. size varied.
2) Patriotic cover.  variety of designs.  Union had greater variety than Confederacy. check out the website for options I offer for sale.
3) Reversed Cover.   where you make up a letter addressed to say the family member, then it's carefully pulled apart and reversed and reglued, then addressed and sent back to the soldier.  An interesting example of practicality of the people back then.  Spectators, esp kids find this a very interesting bit of history to learn about.
4) Wallpaper Cover.  obviously without preapplied paste on back.  cut, fold and glue with design side on inside.  (Look at Goodwill stores or garage sales for older wall paper without applied paste)
5) Captured cover.  eg. a CS solider uses a cover taken from an overrun Yankee camp, (as they always run away ya know), then the Union patriotic saying is crossed out/ or corrected to CS sentiments.
6) Plain cover with hand-drawn design/ hand-written patriotic text.  have seen a variety of types.  some very basic, other very artistically done.

7) Reversed cover made from a pre-printed form, a broadside, etc. with printing on inside of cover.
8) US Christian Commission envelopes for Union troops, used by soldiers to mail home.  A helpful prop to have on hand among the soldiers to illustrate their desire to keep in contact with family.  (I got into reproducing patriotic stationery because I first started reproducing USCC stationery for my living history reenactment, see website for details).  Also US Sanitary issues covers.  I have a few designs reproduced as well as some Sanitary Fair stamps.  Feel free to contact me about either of these options.
9) Stamps tell a story.  Especially if using as props to educate, very effective.  Use both pre-war 1857 designs and war issues.  Also CS provisionals.  If doing late war, then use late war stamps.  ref to my website for stamp usage information.  I have reproduced various stamp options and some CS provisional options.  If you order a mail call pack from me, I would adjust the stamps included to your event's time period.  Have also glued stamps unto the covers and cancelled them for the unit doing it.  Contact me about details.  Some units just order the covers & stamps, then write up one or two letters and photocopy them to be inserted in the covers to save time & energy in writing out individual letters.  I have set up mail call packs for this approach as well.
10) Covers without stamps.  There was no "free soldiers' letter".  Someone paid the postage.  Either the sender or the recipient had to pay to redeem the letter.  But when someone was going home or returning from home, often they would carry letters with them.  So it would be legitimate to have a returning chaplain or soldier bring back unstamped letters from home to the unit in a mail call.
﻿ 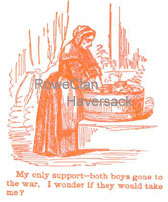 Please feel free to email, call or snail mail me with questions as well as other ideas you have tried about doing mail calls.