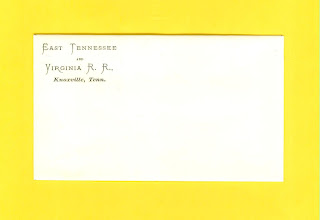 This simple railroad business envelope reminds us of a highly contested Civil War supply route through East Tennessee.
The East Tenn & Virginia RR was chartered in 1849.  Construction began on July 4, 1855 on sections beginning in Bristol and in Knoxville under the direction of Samuel Cunningham, a Jonesborough physician.  Extending 130 miles from Knoxville to Bristol, with a 12 mile branch line to Rogersville, the ET&V was completed on May 14, 1858.  This completion would create an unbroken rail line from New York to Memphis.  (The ET&V Railroad would be consolidated in 1869 with the East Tennesse and Georgia line into the ETV&G line.  In 1894 the ETV&G would merge with the Richmond and Danville Railroad to form the Southern Railway.)
The East Tennessee & Virginia RR was part of the larger construction effort occurring during the 1840s & 1850s in Tennessee.  By 1860 about 1,197 miles of track had been laid across the state.  At the outset of the war all of Tennessee's rail system fell within the Confederacy.  This represented about 13% of the South's total 9,167 miles.  Southern railroads were about 30% of the national total, with smaller organizations and lighter equipment.  Tennessee's location as a border state would ensure railroad lines such as the ET&V would play a vital role for transportation of troops and supplies.
﻿﻿﻿ ﻿﻿﻿      Because this East Tennessee railroad was a major supply route between Virginia and the Deep South, both Confederate and Union forces considered control or destruction of it as vital.  East Tennessee, with its major cities of Knoxville and Chattanooga along with the Tri-Cities of Bristol, Johnson City and Kingsport in the extreme northeastern area, was the poorest of the state's three official political regions.  It was also strongly pro-Union, voting largely against secession in the June 1861 referendum which was passed by West and Middle Tennessee.
East Tennessee's population endured guerrilla warfare, harsh military occupation and invasions of the campaigning armies.  Union loyalists would destroy railroad tracks and facilities to thwart usage, starting in November 1861 when they destroyed five railroad bridges forcing CS forces to invoke martial law and set up a garrison in Johnson City to protect the line.
I bought the original cover which was addressed to a woman in Jonesboro with a war issue US stamp on it.  There was no letter inside, and no postmark to date the cover (the stamp was cancelled by ink pen marks).  I have reproduced it just because I find it an interesting piece of history which could be used by either union or confederate reenactors since the railroad existed prewar.  It would make an interesting cover for use as an "appropriated envelope" [used for personal correspondence] or just to have as part of your living history display if you portray a unit from this theater of war.  Its listed on the website catalog as both RR1US and RR1CS to give you a choice of stamps.  I do not have an example of stationery for use with it.  For CS reenactors I have some interesting Tennessee early war provisionals to make an interesting living history display.
Reference books: The Bridge Burners by Cameron Judd;  East Tennessee and the Civil War by Oliver P. Temple;  Railroads of the Confederacy by Robert C. Black.
Posted by Glenn Rowe at 6:55 PM