General Ambrose Burnside, who replaced George McClellan as commander of the Army of the Potomac in Nov.1862 hoped that his plans in January 1863 to march on Richmond would go better than the disastrous assault on Fredericksburg he had commanded in December 1862 had gone.  This time he planned for his army to outflank Lee’s defensive position at Fredericksburg by crossing the river upstream and drawing Lee’s men out of their defensive positions.  That was the plan. 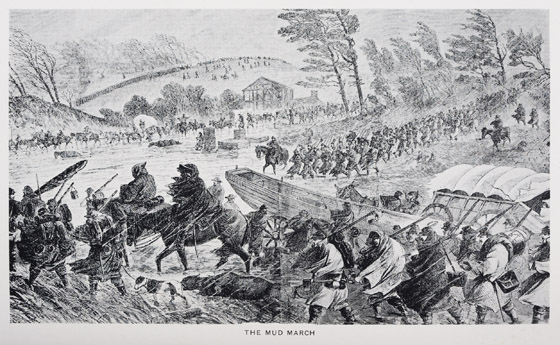 On January 20, 1863 in unseasonably mild weather the Union Army started its march to cross the Rappahannock.  But during the night a violent storm began pouring down rain which continued coming over the next two days.  The torrential downpour turned the dirt roads into a muddy quagmire.  One solider wrote “The whole country was a river of mud, the roads were rivers of deep mire.”  Wagons sank to their wheel hubs in mud.  At times artillery became so hopelessly stuck that even a team of 12 horses and 150 men couldn’t pull one cannon out of the mud.  Soldiers slipped repeatedly, many losing their shoes in the thick mud.  The rain ended on the 22nd, but the unusual above freezing temperatures kept the roads sticky mud paths where horses and mules died of exhaustion.  To help raise his soldier’s spirits Burnside issued a whiskey ration, but instead it led to drunken troops brawling with one another.  Across the river, Confederate pickets watched the struggling Union troops with amusement.  Some put up a large sign on the riverbank that said “Burnside’s Army Stuck in the Mud” and another sign “This way to Richmond”.

On the fourth day, Burnside cancelled the order for the advance and ordered his troops to return to their encampments.  Many in the ranks were totally demoralized.  A Massachusetts soldier, Charles E. Davis Jr. wrote, “It is not an exaggeration to say, that before or after, there was seen no such state of demoralization as possessed a large part of the Army of the Potomac at the end of this foolish undertaking.”  Lincoln replaced Burnside with Joseph Hooker as commander of the Army of the Potomac on Jan.26th.

All this historical background gives an interesting twist to a “revised prayer of the soldier while on the celebrated Burnside Mud March” that John Billings shares in his book of Civil War memories  (Page 72 Hard Tack and Coffee 1887):

"Now I lay me down to sleep
In mud that's many fathoms deep
If I'm not here when you wake,
Just hunt me up with an oyster rake"

You have to smile at the humor of whoever came up with this revision of a prayer meant to comfort.  Sometimes things in life are so bad, the only thing left is to find something to laugh over.  Yes, this is not a “significant historical notation”, but Billings gives us insight into one way the men in the ranks struggling through the muddy quagmire got a brief moment of relief.  And evidently one solider remembered it long after and shared it with Billings.  Good night and watch where you sleep.

Children's Project:  Explore how both the Confederate signs and the Union revised prayer are both "sarcastic humor" using irony (intended meaning is the opposite of what's expressed).  Explore how what is humorous to one is not so funny to the other (am sure neither the Union soldiers seeing the CS signs nor General Burnside were pleased to be mocked).  This might be an interesting way to discuss different types of humor and the challenges of "cancel culture" with your children.  For example, should they share a joke mocking their teacher with the teacher?  And obviously jokes about you as a parent are always off limits.