Yes, the title above is being sarcastic.  John D. Billings shares his memory of a famous Civil War song that captures the “man in the ranks joy” over the army’s provisions (Hard Tack and Coffee.  Soldier’s life in the Civil War 1887).  This song that Billings remembers is a Civil War parody of a popular song from 1854 “Hard Times Come Again No More” by Stephen Foster that 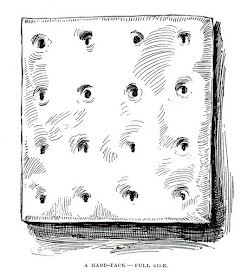 When General Lyon heard the men singing these stanzas in their tents, he is said to have been moved by them to the extent of ordering the cook to serve up corn-meal mush, for a change, when the song received the following alteration:

The name hardtack seems not to have been in general use among the men of the Western armies.”  (p.118-19)

In sharing this memory, Billings is reminding us that he and others did their duty even though it meant having to be “creative” with less than ideal food rations as well as with finding humor in what they were dealt.  Now certainly down through the centuries it has always been the habit, and the right, of the ranks to complain about the rations provided.  You have to enjoy the creativity of this song in lamenting what was a part of life for the soldier during the Civil War.

Children’s project:
1) Make some hardtack (there are various recipes on line; this one from the site:  Emerging Civil War – “Civil War Cookin’: Hard Tack Come Again No More”.  No, haven’t personally tried to use this recipe.  Others on line have differing measurements, salt added, and cooking times etc.
3 cups flour (can use all-purpose, but whole wheat is more authentic)
Water (1 cup)
Add enough water to Flour so the mixture is soft, but not sticky, then knead for 8 minutes to make the dough elastic.  Roll the dough out and cut into 3”x 3” squares ½” thick.  Use a nail or something to prick four holes across in four rows down into the dough, then turn over and do this again -- (this prevents the cracker from “rising” as it bakes).  Bake at 450 degrees for 7 minutes, then reduce oven to 350 and bake for additional 7 – 10 minutes. They will be hard, and get harder as they cool and dry.  Bake them for looks, not for eating as they will be hard.  Don’t put them in a sealed container because they will mold, but let them dry out completely.  Add weevils for additional flavor and realism.  What?!? Just joking.  My family has a couple of hardtack pieces that we use for living history display that were given to us almost 30 years ago.  That should tell you how “durable” hardtack is.
2) Look up the words to the song “Hard Times Come Again No More” and compare them to this Civil War song parody.  (Parody: an imitation of the style of a particular writer, artist, or genre with deliberate exaggeration for comic effect).  Explore how parody works by looking at Foster’s song which calls on the favored in society to see the distressed struggling people around them and realize their plight.  Some say Foster’s song was his way of calling on the privileged to realize the needs of “the less fortunate” around themselves.  Others see his song as expressing his personal feelings as he descended into loss in his own life.  It most likely is a mix of both.  As culture continued to divide and the Civil War came, his song was indeed a challenge needed by society to look compassionately on others in their struggles.  Now obviously the parody Civil War song “Hard Crackers Come Again No More” is making the challenge for the “privileged” well-fed officers to see the plight of the “down-trodden” man-in-the-ranks.  Some eat well in the army, while many others must make do with poor quality rations as they obey the orders of the privileged to march and fight.   The “effectiveness” (= popularity) of the Hard Crackers song is in a great degree based upon the popularity of the Hard Times song in the culture of that time.  Maybe come up with a project where your child does a parody on something that is popular to them.
Posted by Glenn Rowe at 9:25 AM