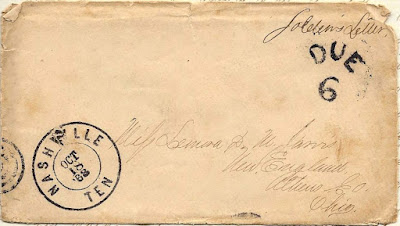 This plain envelope is from Letter #6 which I have not cited anything from, but I have included the envelope picture here because of the "Due 6" cents stamp on it.  The cost of getting letters home for the soldiers varied at times due to factors such as a long distance or the need to be sent on a ship to get delivered.  I do not know what was the cause of the additional cost in this case.  Again, notice that this time George Jarvis wrote "Soldiers Letter" himself in the upper corner.  The postmark shows the letter clearly went through Nashville, TN to be delivered to Ohio.
Constantly changing circumstances sometimes mean rewriting is necessary Letter #7:
Chattanooga, Tennessee
October 3d 1863
Dear Sister,
Your kind note of 14 Sept. came duly to hand last evening about ten o’clock. You have no idea how glad I was to hear from you for I had not heard a word for nearly a month. I have written just as often as I could send letters and even oftener. Two or three letters I have written and kept a few days and then burned them up because I had no opportunity to send them. And by the time I would get an opportunity, they would be stale and I would write again. I have not written much account of the fight [Battle of Chickamauga] because you will get it in the papers much sooner and more correctly than I could give it to you, and I have not been on the field at all, but have been in the rear all the time where we get nothing but exaggerated reports till we ourselves get a paper containing an account of the battle. And even if I had been there, I could only have described first what came beneath my immediate notice.
Jarvis takes keeping the family updated seriously, so as things are often changing, he updates letters if he can’t send them out.  And evidently, he doesn’t want his discarded letters to be found and read by someone other than his family.  Yet he is also honest in that he realizes his perspective is often limited and may not be the total truth of what has taken place.
As I said at the beginning, I've only cited excerpts focused on illustrating his high value of staying connected with family through the letters.  I appreciate his sense of humor and also his humility.  He is sharing what he is experiencing so they can continue to be involved in his life even though separated by hundreds of miles.  Mail Call for him was a good thing to look forward to.  And because his letters have been preserved, we also get to see into his joy of keeping connected with his loved ones back home.
Children Projects:
1)  Do you think Jarvis’ action in letter #7 in getting rid of old letters that he didn’t get sent out and so had to update by rewriting is in part due to his finding that confederate soldier’s letter he mentions in letter #1?  He doesn’t want his feelings, concerns and perspectives being read by someone other than his intended readers, his family.
2)  Explore the issue of stamps being worth money by also reading the blog I mentioned in comments on letter #2.  Today if you took in a stamp to a store would they accept it as change?  No.  Especially the “forever stamp” which has a constantly changing value.
3) Look at the envelope pictures.  They are marked “soldier’s letter”, but they were not "free".  The family had to pay the money due to redeem them at the hometown post office.  And remember “3 cents” back then was of much greater value then 3 cents is today.